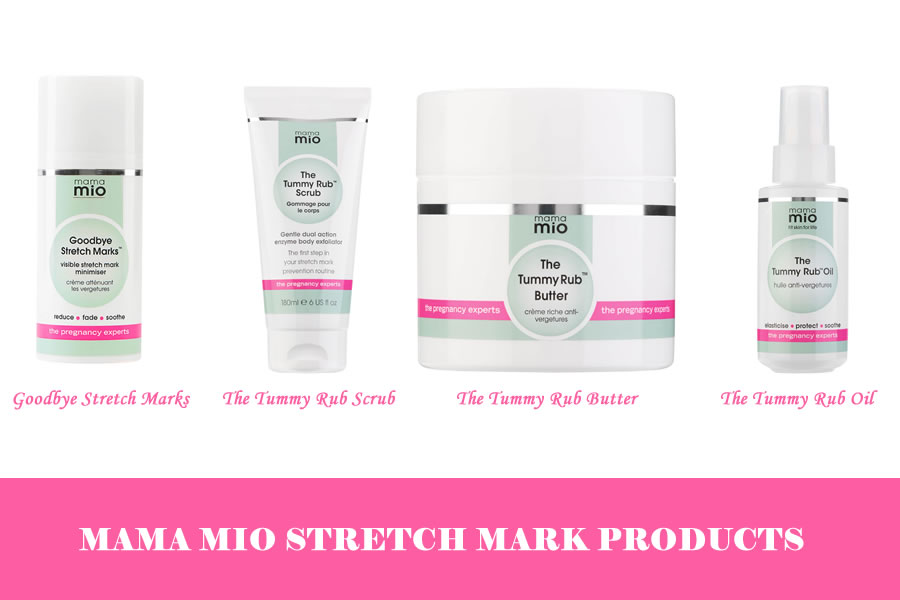 This post may contain affiliate links for products I recommend. If you click a link and buy something I may receive some compensation. This does not change the price you would pay.

The Mama Mio Stretch Marks range of products has long been in our books as some of the most efficient creams out there. We did a brief review of the Mama Mio The Tummy Rub Butter before and are now delighted to be coming back to this brand for a more in-depth look.

That being said, we pride ourselves on our honest, unbiased reviews and never fail to note any potential shortcomings of a product.

Mama Mio brand is one of the first brands to focus their products exclusively on pregnancy skincare. They tend to employ loads of healthy, organic ingredients in their products, and a few unhealthy chemicals as possible.

Throughout the sixteen years it’s been on the market, Mama Mio has managed to amass an immense, international loyal following that went on to use their products long after pregnancy, which says something about the Mama Mio brand.

In this article, we’ll be going through their complete range designed to treat and prevent those unsightly stretch marks, but for now, let’s start with…

How does Stretch Mark Minimiser work?

Mainly, it’s as it sounds. A minimiser is specifically designed to reduce the appearance of already existing stretch marks, so I’m afraid if it’s prevention you’re after, this product is not for you.

A minimiser focuses on a unique blend of fading agents to diminish the stretch mark, both old and new. It also employs ingredients that boost the skin’s natural healing system, which can help new (red, brown, purple) stretch marks fade away more naturally.

The Mama Mio Minimiser uses a combination of peptides to reduce the stretch marks’ texture.

Matrixyl 3000 TM is a peptide that’s believed to increase collagen production. According to the manufacturers, peptides work “by tricking your fibroblast cells into believing they are damaged, so they need to increase the production of collagen and elastin.”

So, What can We Expect?

According to Mama Mio, you can expect this concentrated formula to reduce the appearance of your stretch marks and fade them away in as little as twelve weeks. According to the customer reviews, however, it does not seem to be quite so efficient, though even the negative reviews note that it’s a worthy moisturizer, so there is that, at least.

We’re firm believers that customers should look at the ingredient list before buying a skincare product, so they know what they’re exposing themselves to and what they can truly expect from a product.

Something that we have always loved about Mama Mio products is that they are remarkably free of unhealthy chemicals, or, as they like to put it, follow a ‘no nasties’ policy. They are free from parabens, petrolatum, colorants, xenoestrogens, PEGs, and phthalates, which is a major plus in our book.

The only bad ingredient we were able to find was Tocopheryl Acetate, a form of hydroquinone, which acts as a skin lightener. While not necessarily dangerous as is, prolonged use of this can seriously damage the skin’s pigment, so buyers be warned.

How to get the most out of it:

Whereas most stretch mark products are recommended to be used twice daily, Mama Mio goes a step above that and asks its’ customers to rub the Minimiser into the affected area three times per day, over twelve weeks.

They also recommend taking Before and After pictures to document your progress, which we think is a really good idea. Often, because we’re used to be looking at our own bodies so much, we tend to overlook or overestimate such changes, so taking pics might give you a better, more realistic idea as to how much your skin is changing.

Some Good, Some Bad…

To understand each product, we have an extensive look around the reviews area. For this Minimiser, here’s what we were able to come up with:

P.S.: At the time of writing, the Minimiser is not in stock on the official website, but can be purchased through Amazon. 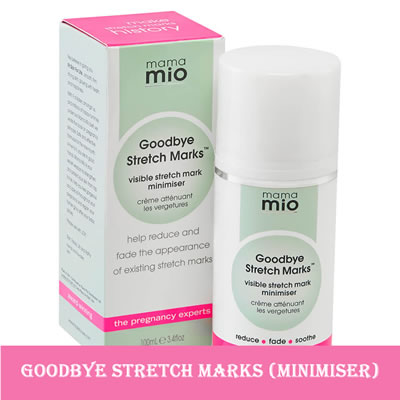 Another aspect we like about Mama Mio is that they not only provide stretch mark creams but have a product for every step in your stretch mark journey.

To get rid of damaged skin and promote healthy skin cell regeneration, it’s vital that you exfoliate regularly, to remove dirt and dead cells that might be clogging your pores. After exfoliation, it’s also essential that you use a cream or body butter to thoroughly moisturize the fresh skin layer that’s just been exposed.

It’s recommended that you follow up this by using a hydrating oil to seal in the moisture and provide a long-lasting effect.

And Mama Mio has you covered all along the way.

This gentle scrub is just what the doctor ordered, especially if your skin is extra-sensitive from pregnancy. It’s gentle enough so that you can use it on a daily basis, but just rough enough to efficiently remove dirt and build-up.

The Tummy Rub Scrub follows a unique blend of:

According to customers, it’s:

Since there are relatively few reviews, it didn’t seem to have any downsides, and considering all the yummy ingredients, as well as the Mama Mio ‘No Nasties’ policy, we don’t see how it could be harmful, and so heartily recommend you give Mama Mio The Tummy Rub Scrub a try.

How to Use: Gently rub the scrub over your skin in small, circular motions, to gently remove dead cells and dirt. When you’ve covered the entire desired area, rinse with warm water.

At the time of writing, the Tummy Rub Scrub can be purchased both on the original website, through the link above, and Amazon. 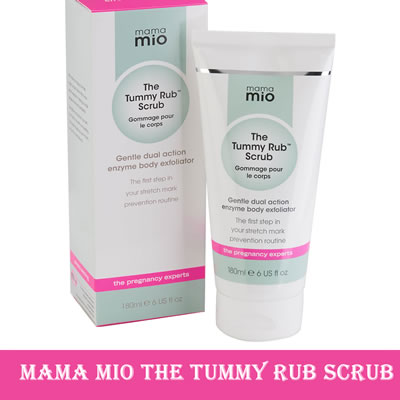 The Tummy Rub Butter is a much-loved stretch mark cream that doubles as a potent moisturizer and is thoroughly recommended for both expecting mothers, or people who are looking to prevent the appearance of stretch marks altogether, as well as those who are trying to minimize and fade away already existing marks.

It works because it has:

Mama Mio The Tummy Rub Butter is a customer favorite because:

The only negative aspect seems to be:

It seems to be effective in hydrating the skin and thus preventing new stretch marks from appearing, as well as fading away existing ones.

P.S.: Right now, the Tummy Rub Butter only seems to be available through Amazon.

Finally, a hydrating oil works because of its’ occlusive effect. That means it seals in the moisture provided both by itself and by the Tummy Rub Butter, ensuring that your skin is well nurtured and reasonably safe from damaging agents.

Also, the Tummy Rub Oil is a great addition to your skincare routine because it gives you an excellent chance to massage your skin, which stimulates the circulation of the blood, which can, in turn, improve the production of collagen, as well as encourage the healing process.

What are people saying?

Okay, okay, so what’s the catch?

You should: Rub the oil between your palms for a moment, to heat it up a little (promotes absorption), and then lather unto the affected skin. Use this twice daily, after a shower, and after using the other Tummy Rub products. 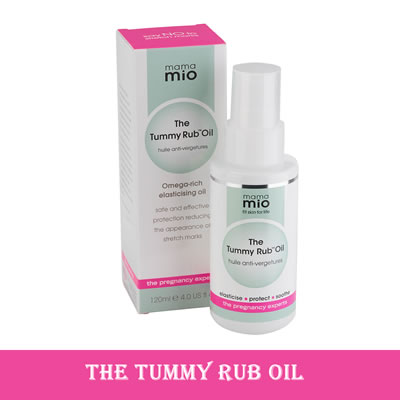 Verdict Time: Which Stretch Mark Product should I choose?

Well, we understand why some people had trouble with the Minimiser and how it might not work as well as expected, so judging by the much lower reviews that one had, we’d advise you to give it a pass.

However, we thoroughly encourage you to try the whole Tummy Rub three-step formula, because it has some of the best reviews we’ve ever seen for stretch mark products, and because exfoliation and hydration are the two critical aspects in treating/preventing stretch marks.

So, if you’re going to do that, might as well do it with products that have received good grades, right?

Here, we seek to answer some of the most frequently asked questions of customers, like…

How long does it take for results to show?

Results should kick in for prevention right away, meaning you should never see stretch marks. For treatment, for both the Tummy Rub products and the Minimiser, we recommend giving it at least two months before giving up on it.

Are the results for good?

Yes, Mama Mio doesn’t try to hoodwink you – if they helped prevent/fade stretch marks, then you can rest assured results are permanent.

Are the Mama Mio products safe for use during pregnancy?

Yes, thanks to their ‘No Nasties’ policy, the Mama Mio products are particularly safe for use during pregnancy and while breastfeeding.

Tip: Mama Mio recommends using these products both during pregnancy, as well as for four months after birth, as you slowly lose the weight, and your body gets back to normal.

It seems we’ve reached the end of our Mama Mio review, and it’s time for us to impart some ultimate knowledge about these products. As we said, we were quite impressed with the brand, to begin with, and this further dive into their products has only helped fortify that opinion.

We can safely recommend the Mama Mio products and can only note that the only issue with them might be the somewhat high price. But judging by the many satisfied customers, the price is well worth it in saving you all that stretch mark anxiety.

Besides, from what we’ve gathered, their products seem to last for quite a long time, so that shouldn’t be an issue.

If you feel the Mama Mio brand is not for you, no worries, there are plenty of stretch mark cream reviews around, so we’re sure you’ll find something to your liking, if only you have enough patience.

StretchMarkRemovalInfo is a participant in the Amazon Services LLC Associates Program, an affiliate advertising program designed to provide a means for sites to earn advertising fees by advertising and linking to Amazon.com.