Skip to content
This post may contain affiliate links for products I recommend. If you click a link and buy something I may receive some compensation. This does not change the price you would pay.

How much does the removal of stretch marks cost? We’ve been discussing many different methods available for treating (more or less efficiently) those pesky tiger stripes. But let’s be honest, one of the biggest questions on everyone’s mind is how you can do it on a tight budget, and what’s the value for money for each method.

This article will be going through the different options available and examining each one’s cost.

There are several types of available lasers, and their costs are often equated with the level of efficiency and the dangers involved. So what are the costs of laser treatments for stretch marks?

Note: All the costs below are estimates. The final price will depend on your chosen facility’s reputation, the seriousness of the scars, and so on.

Ablative laser skin resurfacing is the toughest available at the moment. It consists of using a laser to generate intense heat over the skin, which will create wounds. These wounds will then activate the natural wound healing response and encourage collagen production to create new, healthy skin layers.

Co2 is a form of ablative laser that deals with deep stretch marks and can be used quite successfully to create new, healthy skin that will fade considerably (and sometimes disappear altogether) the stretch mark in question.

The ablative one is quite similar to the Co2, as it too uses carbon dioxide laser to treat severe wounds. They are both considered effective, the only difference being that Restore is aimed at more superficial scars and issues, while the Repair is more intense. The ablative one falls in the same price range as other ablative lasers. For an estimated cost of non-ablative lasers, see below.

Efficient for stretch marks? They can be very good for fading away stretch marks, yes, but they have a considerable downtime and carry some risk (not to mention they’re quite pricey), so I’d recommend using ablative if your stretch marks are prominent.

Cost? On average, one session costs around $2,500, and you may need multiple sessions, depending on the scars’ severity.

Efficient for stretch marks? Yes, though not as extreme as the ablative version. The non-ablative laser should be used for old, white stretch marks and superficial marks. While it will improve deep scars’ appearance, results won’t be as impressive as for ablative lasers.

Cost? Generally, one session of non-ablative laser resurfacing costs around $1,400, and again, you will likely need several sessions.

Exilis works similarly to laser resurfacing. Instead of a laser, it uses radiofrequency to generate heat underneath the skin and trigger that collagen production we talked about. It is generally marketed as a less painful alternative.

Efficient for stretch marks? Exilis can help fade the stretch mark’s color and visibility, but it won’t make it disappear completely. So the best you can expect is an improvement in appearance.

Cost? A session averages between $200 and $300, though you will need around six treatments to see results. 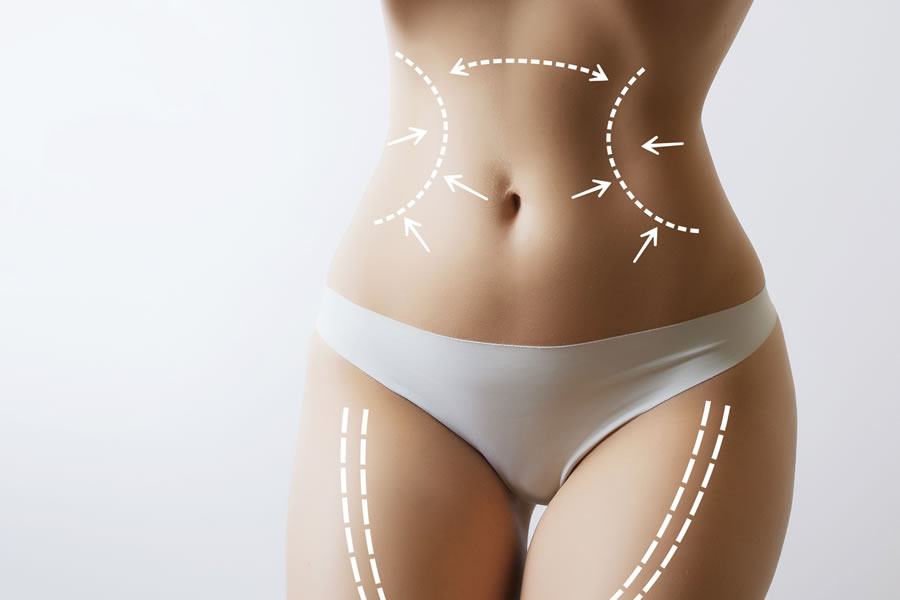 By far, the most extreme option of treatment is excisional surgery, which means having the area of the skin containing the stretch marks removed during surgery. However, stretch mark surgery removal cases are extremely rare and are usually contained inside other procedures, such as a tummy tuck or a breast lift.

Efficient for stretch marks? You are getting rid of the stretch-marked skin itself, but you will be getting a nasty surgery scar instead, so it’s not a very good deal.

Cost? An abdominoplasty (the official name for a tummy tuck) will cost over $5,000, depending on the doctor’s technique in question. The final cost will depend on the area you want to have the procedure done but expect to pay several thousands of dollars.

Another popular method is that of the chemical peel. Chemical peeling is a form of exfoliation that uses a controlled solution to remove the outermost layers of skin and resurface new, healthy skin cells.

It is often used for scarring and much preferred since it is not as invasive and doesn’t require as much downtime as an ablative laser. Of course, this depends on the type of peel used. While the above is true for light peels, deep peels will have quite a recovery time and damage your skin considerably (for a time).

Cost? While light chemical peels are available for as little as $150, they are not generally effective for stretch marks. The cost of one deep chemical peel session averages around $6,000.

Microdermabrasion is quite popular since it’s a minimally-invasive treatment option that uses a special, rough-surface device to essentially sand away (or exfoliate) the topmost layers of skin. This process gently grazes the skin and kickstarts collagen production, and allows new, healthy skin cells to shine through for improved appearance. On average, one session lasts between 30 min to an hour, but you will require multiple sessions to see a definite improvement on your stretch marks.

Efficient for stretch marks? Depending on the severity of the marks, microdermabrasion can be more or less effective in improving the affected area’s appearance, though it’s unlikely to make marks disappear completely.

Cost? On average, a session ranges from $150 to $400, but you will require several sessions to reap the procedure’s full benefits!

With micro-needling, your skin is effectively being poked by dozens of tiny needles. Of course, the wounds are superficial and intended to stimulate collagen and elastin production and the skin’s natural wound-healing process. Some prefer it as it takes little time (usually no more than an hour) and doesn’t require any downtime, although the skin will appear slightly pink immediately after.

Effective for stretch marks? Microneedling has proven an efficient treatment for stretch marks, although, as above, you’ll probably need to go through a few sessions before you see an improvement.

Cost? A professional micro-needling session will cost anywhere between $200 and $700, but you will need roughly six sessions.

Carboxytherapy treatment is a process in which carbon dioxide (a naturally-occurring gas) is infused under the skin to stimulate blood circulation and new collagen production. It is commonly used for minor scarring, stretch marks, wrinkles, and so on.

Effective for stretch marks? Yes, carboxytherapy seems to be quite useful for fading away stretch marks since it brings forth new, healthy cells and makes the affected ones fade considerably.

Cost? On average, a session of carboxytherapy costs between $70 and $200, but you will need up to ten sessions to see a difference!

Of course, a popular option is the use of stretch mark creams, such as TriLastin and Skinception, among many others, or stretch mark oils to treat and prevent the appearance of stretch marks. Usually, these creams will contain a mix of lightening ingredients to fade the skin’s redness, as well as collagen-boosting ingredients, and maybe even mild exfoliators.

Stretch mark creams are widely popular since they are inexpensive and not at all invasive.

Efficient for stretch marks? While some creams will improve the skin texture and gradually fade stretch marks, they are not as efficient as the other options. A product applied to the skin surface can only go so far.

Cost? The cost varies widely and can go as little as $8 or as high as $100, depending on the brand and type of product.

* You can also do this procedure at home with specially-bought equipment. While this option is cheaper, it also involves more risks (if you’re not a skincare professional) and inferior technology.

It’s hard to say which removal method of the above works best since results vary depending on skin type, the severity of the stretch mark, and so on.

In the end, it’s a good idea to figure out how much pain and recovery time you’re willing to go through to get rid of your stretch marks.

If you want a mild appearance boost, then a cream, possibly combined with some chemical peels, would probably be best.

If you’re looking for something more intense, laser resurfacing or microdermabrasion are probably good options.

StretchMarkRemovalInfo is a participant in the Amazon Services LLC Associates Program, an affiliate advertising program designed to provide a means for sites to earn advertising fees by advertising and linking to Amazon.com.